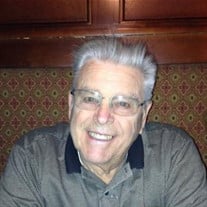 Chester George Klabbatz, of Yardley, Pennsylvania passed away peacefully on Sunday, May 8, 2022 at the home of his daughter in Macedonia, Ohio. He was born and raised in Trenton, New Jersey and was a graduate of Trenton High School, "Class of 1953". Chester earned his associates degree from Trenton Junior College and proudly served in the United States Army. He worked as a manufacturing engineer as executive vice president for Royal Engineering Company in Trenton, New Jersey. Chester had a love of water and it grew when he became a member of the Bordentown Yacht Club in 1965, he rose through the ranks and became Commodore in 1975 and bought his boat the Les-Kar II, in 1977, where he would spend the summers. He was honored with life membership in 1985. His dedication to the Yacht Club continued as he held every office and served as the clubs Treasurer for 17 years. He was also a member of the Silver and Gold Past Commodores of the Delaware River. He joined the US Coast Guard Auxiliary in 1976 where he dedicated over 10,600 hours teaching, patrolling, performing safety inspections and serving the boating community. He held many different flotilla and division positions within the Auxiliary. He was an integral part in the organizing of the Bordentown Sardet (search and rescue detachment) he spent countless hours maintaining and manning the Sardet, providing boaters on the Delaware River with any assistance needed. His hard work and dedication saw him receive over 30 different service awards from the auxiliary. His life of service wasn't just limited to boating, Chester was a member of the First Presbyterian Church of Trenton, The Jaycees, where he was a JCI senator, The Bordentown Elks 2085 and the American Legion post 0945. Chester had a lifelong love of singing which began at a young age. He joined the choir at First Presbyterian Church of Trenton, where he met his future wife, Irma Joyce, they were both members of the Mercer County Community Choir. His love of singing continued later in life by becoming a member of the Abington, PA. chapter of the Barbershop Harmony Society for 31 years and was a member of Vintage Harmony. Most recently he was a member of the Hamilton, N.J. Brothers In Harmony where he helped them to get to 6th place in the 2013 Toronto International Competition. The barbershop community had him singing in many different states and several countries. He is preceded in death by his wife Irma Joyce (Werts) in 2000, and siblings Douglas, Donald, Ronald, and Diane Shambora. He is survived by his two daughters, Karen Lynn Morton (Timothy) of Bordentown, NJ and Leslie Dale Klabbatz of Macedonia, Ohio; five grandchildren Timothy (Christina), Jennifer, Patricia (Ellery Perfect), Jeffrey (Amanda) and David (Alyssa Conroy) Morton; eight great grandchildren, Amy, Katherine, Morgan, Molly, Michael, Christopher, Joseph and Emma. Relatives and friends may attend a visitation on Sunday, May 15, 2022 from 4-7 PM at Huber-Moore Funeral Home, 517 Farnsworth Avenue, Bordentown, N.J. 08505 and again on Monday, May 16, 2022 from 11A.M. until the time of the service at 12 PM. Interment will follow in Greenwood Cemetery, Trenton, N.J. Memorial contributions in his memory may be made to Mt. Carmel Guild, 13 N. Clinton Ave., Trenton, N.J. 08609. Services under the direction and care of Huber-Moore Funeral home, Bordentown, N.J.

Chester George Klabbatz, of Yardley, Pennsylvania passed away peacefully on Sunday, May 8, 2022 at the home of his daughter in Macedonia, Ohio. He was born and raised in Trenton, New Jersey and was a graduate of Trenton High School, "Class... View Obituary & Service Information

The family of Chester Klabbatz created this Life Tributes page to make it easy to share your memories.

Send flowers to the Klabbatz family.